What Do Baby Bunnies Eat?

Prepare yourself for rabbit ownership, whether you’re adopting an older fluffy bundle of joy or acquiring a new tiny bunny.

The first six months of a rabbit’s life are significant for its long-term health. A rabbit is continuously developing during this critical period of its development. You must compensate for this growth by feeding your baby rabbit appropriately. It will result in strong bones and muscle mass throughout adulthood if your youngster rabbit is adequately fed.

Make certain that your rabbit gets a solid grasp on eating habits. It’s easy to overfeed young rabbits, which can lead to obesity as they get older. When your rabbit’s growth spurts fade away, it’ll require less protein and more fiber. We’ll go through what the ideal diet for a newborn rabbit consists of.

What Do Baby Bunnies Eat?

So what should pet baby bunnies eat? Baby rabbits, contrary to popular belief, require more than carrots and lettuce in their diet. They need a varied diet that includes hay, fresh veggies, and fruit, as well as a few pellets. Rabbits have delicate digestive systems, therefore adding hay or pellets gradually or introducing new fruits and vegetables must be done with care to allow the rabbit’s system to 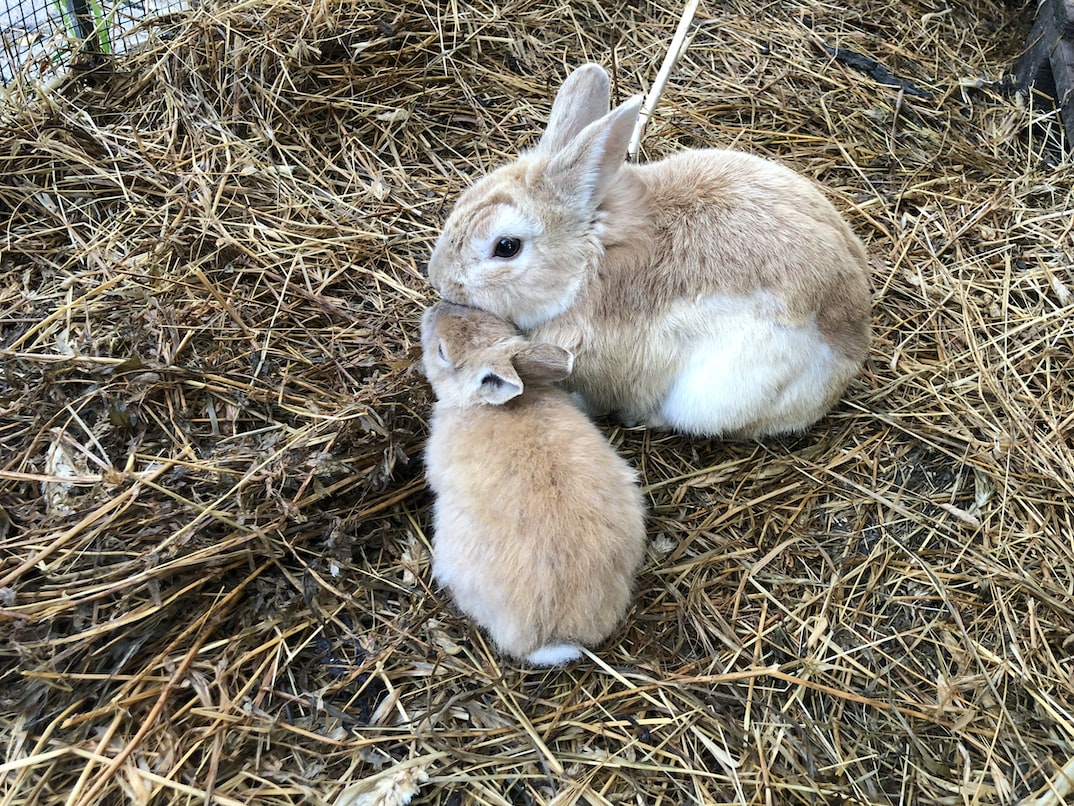 A Couple of Bunnies Sitting on Hay

Hay, in the form of long-stemmed fiber, would be at the bottom of a rabbit food pyramid, accounting for 80 or 90 percent of its diet. Rabbits must have an unlimited supply of fresh hay every day as grazing animals.

You’ll need to offer your rabbit grass hays. Timothy, orchard grass, brome, and oat hay are all good types of grass hay for rabbits. You can give your bunnies one variety of grass hay or a combination of different hays. Check the sell-by date on the package before buying; if it has passed

Because it’s a legume, not a grass, alfalfa hay isn’t suitable for adult bunnies since it’s too rich to be fed on a daily basis. Alfalfa can be given as a special treat once in a while. Alfalfa hay is acceptable for rabbits under the age of one year; however, if they are also consuming alfalfa pellets, they should be switched to grass hay as soon as possible.

A Couple of Baby Bunnies Chowing Down On Food Pellets

Timothy hay pellets can be fed to bunnies in tiny amounts. A one-quarter cup of pellets per day is sufficient for a typical-sized adult rabbit. If your rabbit is under five pounds, feed him or her only an eighth of a cup at a time. Rabbits weighing more than ten pounds do not require more than a quarter of a cup, as it is not an essential component of their diet.

Alfalfa pellets can be fed to rabbits under the age of one. If you’re feeding your young rabbit alfalfa pellets, make sure you’re giving him grass hay instead. The higher the fiber content in the pellet, the better. Do not buy rabbit pellets that contain nuts, dried corn, and seeds because they might be very dangerous to rabbits. 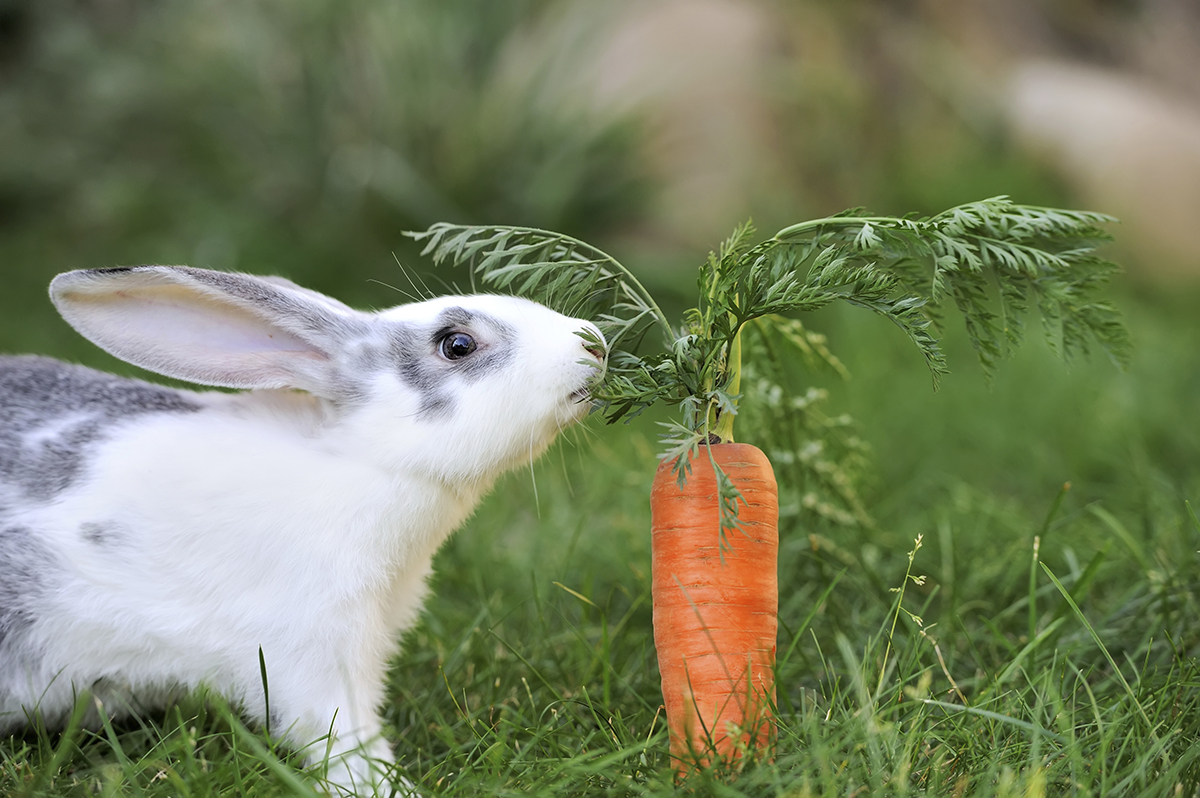 A Baby Bunny with A Carrot

Rabbits enjoy vegetables and herbs. Most greens available in a grocery store are safe for rabbits, with some restrictions and exceptions.

Adult rabbits should only be fed one to two cups of fresh vegetables each day. Adult bunnies weighing less than five pounds should receive only one cup of fresh fruits and veggies each day. A diet including two or three different vegetables is ideal. Because, as previously said, rabbits have delicate digestive systems, introduce one new vegetable at a time and check for signs of loose stool or diarrhea. Certain veggies may be consumed every day, while others should be given only once or twice a week.

It’s not advised to give your baby rabbit corn, potatoes, seeds, beans, or nuts. These items are difficult for rabbits to digest and can lead to serious digestive issues.

Carrot tops, zucchini, cucumbers, wheatgrass, endive, radish greens, bell peppers, and other herbs are all vegetables that can be eaten on a daily basis. 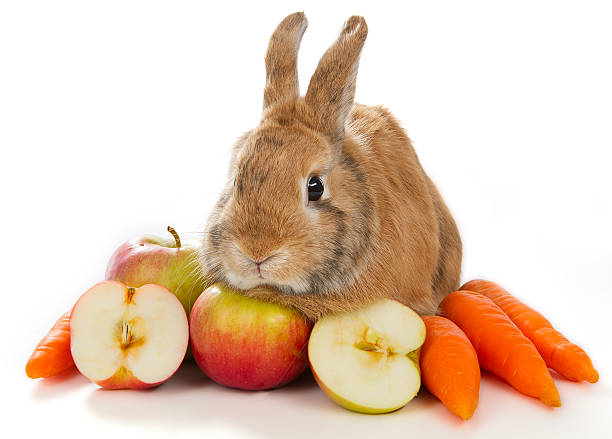 A Baby Bunny Eating Some Fruits

One to two times a week, offer your rabbit fruit. The right quantity for a five-pound bunny is one to two tablespoons of fruit, which should be given in one to two spoonfuls once or twice per day. As with vegetables, fruit should be introduced gradually and one item at a time.

The fruits that can be fed to baby bunnies include apples, bananas, melons, peaches, pears, grapes, pineapples, plums, and watermelons.

Many rabbits, like many humans, have a sweet tooth. Treats are at the top of the rabbit food chain and should be given in small quantities. Fresh or freeze-dried pieces of fruit, natural, unprocessed mixes that include dried flowers, hay, and Oxbow brand rabbit snacks are all good treats for your bunny.

Never give your rabbit store-bought snacks unless they are clearly labeled as such. Because not all of them are suitable for rabbits, always read the ingredient list on commercial goodies. Never offer your rabbit human sweets since they contain added sugar, preservatives, or artificial coloring.

Instead, keep your bunny’s water supply clean and fresh. Bunny rabbits require an endless supply of pure water that should be changed daily. Every few days, the container should be cleaned with soap and water. Bottles of water are typically difficult to clean. At the same time, your baby bunnies may also find it quite difficult to drink from them. Thus, bowls are preferable. A heavy ceramic bowl is ideal since it won’t easily fall over.

How To Feed Baby Bunnies With A Bottle?

Let’s go through what to feed a newborn rabbit now that we’ve decided what to feed a newbie rabbit. As we said earlier in this post, the majority of newborns who are nursed by their moms have an instinct to seek out a teat and to suckle!

However, this may require a little bit of persuasion from your mother as well as some practice before it becomes natural. You may discover that bottle-feeding a newborn rabbit who hasn’t been taught to suckle isn’t as simple as it appears, and doing it improperly might be harmful to the youngster.

So, let’s go through the steps to safely bottle-feed a baby bunny:

How Much Do Baby Bunnies Eat? 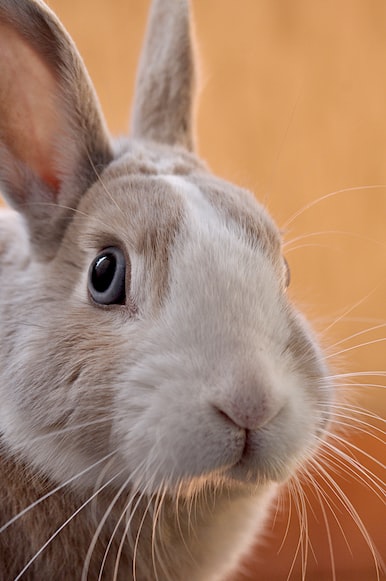 Because young rabbits are continuously developing, they require more food. Baby bunnies also eat food to keep cozy ahead of the first hair loss. Here’s some information on how babies acquire fur.

Baby rabbits’ diets change little as they develop. At around the age of two weeks, they will start eating solid hay. However, this will be supplemented by mother rabbit’s milk. Baby rabbits consume pellets and hay by the time they are four weeks old.

A baby rabbit will benefit from alfalfa hay. Protein and calcium in the feed will aid in the development of strong muscles and bones. However, mix in some normal hay as well. When your rabbit reaches maturity, this will make the transition much easier.

Make sure you get pellets that are particularly made for young bunnies. These will give all the nutrients a growing rabbit require.

Keep your baby bunny’s diet the same. A change in diet can be harmful to any rabbit, especially young ones. Chop and alter your rabbit’s food only when it is genuinely required.

What Do Baby Bunnies Eat Between After Six Weeks Till Weaning Period?

Most bunny parents report that their baby bunnies naturally lose interest in nursing as they approach six weeks or eight weeks of age. After this, the infant may be safely switched to a completely solid diet.

So you’ve been a bottle-feeding bunny who has grown more interested in the big rabbit food you’ve been leaving in his cage. What can your baby rabbit eat once she starts drinking less milk, more water, and looking for solids?

You can begin feeding bunnies on solid meals like soft alfalfa hay at age six to eight weeks. This is a popular form of bunny food based on hay that meets the nutritional requirements of newborn bunnies being gradually weaned from milk through 12 weeks of age.

Make it a point to introduce new things gradually as they’re still growing and getting used to new experiences!

What Are The Natural Predators Of Baby Bunnies?

Rabbits may be attacked or eaten by a variety of animals, including man. In reality, rabbits have a greater risk of being murdered than most other animals.

Depending on where you live, the most common predators may be quite different. Wild foxes or pet cats are among the most popular predators of domestic or companion rabbits.

The doves, just like the crows, are not the only predators of rabbits. Many individuals are shocked to learn that huge birds, especially if they are baby, young, or small breed types, are predators of rabbits. Northern Cardinals, Mockingbirds, Brown Thrashers, Northern Mockingbirds, Gray Catbirds, White-throated Sparrows, and Indigo Buntings are some of the birds that may be found in your area. Other rabbit predators include ferrets, weasels, badgers, rattlesnakes, and stoats.

If you have a pet rabbit that is outside for any length of time, you must always be on the lookout. It is advised that the rabbit be kept inside a safe run or hutch when not watched.

Rabbits can also be murdered by a predator outside the hutch, or die of shock or cardiac arrest. When confronted by a predator, the rabbit may panic and harm themselves or simply die of fright.

Are Baby Bunnies Healthy To Eat?

Generally, the meat of a Rabbit is low in fat and can be compared to chicken meat. It is excellent in soups, stews, and casseroles. It is considerably higher in protein and leaner than other meats, making it suited for both dieters and healthy eaters.

Rabbits have low body fat because of their diet and lifestyle. Rabbits are fast and active, unlike cattle, which are sluggish and inactive. They consume meals that are high in fiber, such as seeds, roots, and grains.

According to the USDA, a 3-ounce serving of wild, uncooked rabbit has 96 calories. It also contains approximately 18 grams of protein, less than 2 grams of fat, and no carbohydrates. The rabbit’s lack of fat makes it preferable to other meats, particularly beef.