What Do Baby Squirrels Eat?

Squirrels are one of the most fascinating creatures to watch. They’re so full of life and energy. Baby squirrels, on the other hand, are adorable. Look around if you hear a high-pitched squeaking noise from beneath the ground. You could have found a newborn squirrel. If you find one without its mother and it requires assistance, you may be the only person able to save it, but this should be your last option.

The first thing you should do is simply leave it be and wait for its mother to take care of it. If that isn’t an option, the next best choice is to contact a wildlife rehabilitator who can look after the squirrel until it is able to care for itself.

You should only attempt to care for the baby yourself if the first two options are not feasible. I hope this information serves as a useful starting point in your adventure.

What Do Baby Squirrels Eat?

Baby Squirrels with Their Parent

Nuts, in particular, are popular among squirrels since they provide a rich source of fat and protein. Although peanuts are the first food that most individuals think of like a squirrel diet, newborns between 7 and 8 weeks old require a more varied regimen. In addition, it is against the law to keep wild animals in most U.S. When there’s no choice but to feed the squirrel yourself, try considering these options:

How To Feed Baby Squirrels?

If you’re looking for a new baby squirrel that has lost its mother, here are some things to consider: You’ll need to feed and care for it on your own if you have a baby squirrel whose mother has died or stopped caring for it. Wildlife rehabilitators confront this problem on a daily basis, and as a pet owner, you may use

The first step in caring for a baby squirrel is to figure out how old it is. Squirrel species mature at diverse speeds, but the typical Eastern grey squirrel that may be found all across North America has straightforward indicators for determining age.

Your squirrel’s fur is mostly white, with a pink tinge. Your baby squirrel has no hair and is therefore pink and bald. At seven days old, squirrels start to develop hair.

He’s less than three weeks old if his eyes are shut and his ears are flat against his head. The ears of a squirrel open at 3 weeks and fully lift at 4 weeks. His eyes begin to partially open as early as 3 weeks old, but don’t completely open until 5 weeks.

At 4 weeks, the lower teeth appear, and the upper teeth begin to grow at 5 weeks. By 6 weeks of age, your baby squirrel can sit upright and look like a miniature adult squirrel.

Examine the infant’s skin and see whether it remains tented, or if it springs back to normal immediately. If it quickly flattens out, he is only slightly dehydrated and should be fed Pedialyte for 6 hours. If it stays tented for a bit before returning to normal, hydrate with Pedialyte for approximately 8 hours. If he is tented for a long time, he is severely dehydrated and will require at least 12 hours of rehydration.

Always hold the baby squirrel upright in one hand while feeding him with the other. Fill the Pedialyte-eyedropper or syringe with water and offer it to the squirrel until he is full and rounded but not overly bloated. If he drinks in a healthy manner, he should drink this solution every 1 1/2 to 2 hours for the indicated amount of time. If he doesn’t want to take much liquid, offer him more every 30 minutes until he is drinking properly and then begin typical therapy.

How To Feed a New Born Baby Squirrel? 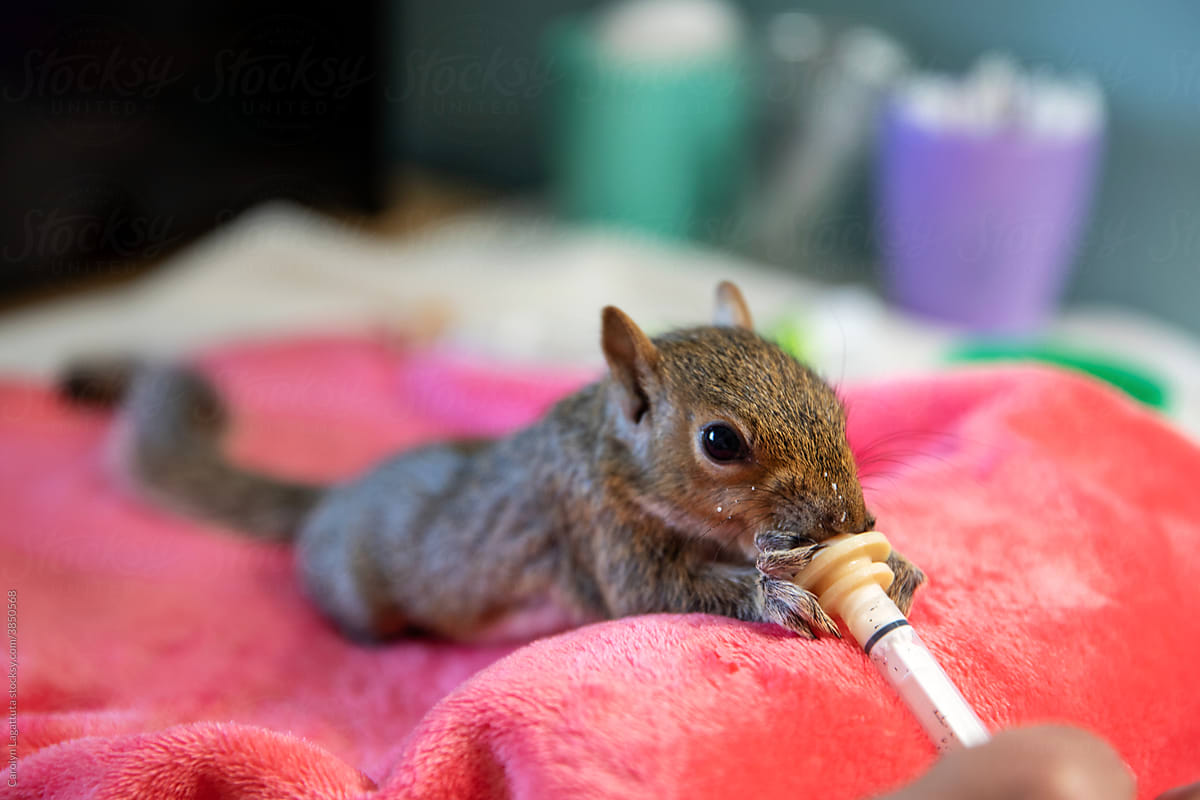 A Baby Squirrel Being Fed with Milk

You can begin feeding your baby squirrel a milk-replacement formula after the first 6 to 12 hours. Esbilac is designed for puppies, but it precisely matches the requirements of baby squirrels.

For the first feeding, mix one-part Esbilac powder with four parts lukewarm water. If your Esbilac is premixed, dilute it with equal amounts of water. Add one more powder at each feeding until your recipe reaches a two-to-one ratio of Esbilac to water.

What Are The Natural Predators of Baby Squirrels?

Squirrels are also targeted by a wide range of predators, including snakes, owls, chipmunks, cats (particularly barn cats), dogs (particularly herding breeds), raptors (such as hawks and falcons), foxes, coyotes, rats, opossums, skunks, raccoons, bears, bullfrogs. Squirrels live longer in captivity than they do in the wild, as a result of their ability to cope with adversity.

Thus, the list of animals that eat baby squirrels is long and depends on where squirrels live and the type of squirrel.

There are undoubtedly more creatures on that list we could include. While they aren’t necessarily at the bottom of the food chain, they can’t defend themselves like a lion can. This is why they don’t live very long.

Squirrels are small, furry mammal relatives that have been around for a long time. Gray and flying squirrels, red, fox, and ground squirrels are just a few of the species. Squirrels frequently dwell in trees and scurry on the ground looking for nuts, seeds, and other forms of nourishment.

Some people who enjoy natural wildlife, such as feeding birds and squirrels at feeders, exist. The predators that a squirrel must avoid vary depending on the types of environments in which they live, putting them at risk from a variety of animals that hunt for food.

In Minnesota and other midwestern states, ground squirrels that build homes in agricultural regions are easy prey for larger predatory birds such as owls and hawks. They can swoop down and consume squirrels eating acorns or corn in the open fields.

Squirrels are most frequently preyed on by raptors like hawks and eagles, which are their main predators. All birds have a great long-distance vision, but eagles can see eight times further than humans. They can detect a squirrel and other food at around two miles away using their exceptional eyesight.

Squirrels are thus far unable to hide from these large predators, which makes it difficult for them to scurry about. These aerial hunters may also wait in the open fields for the rodents to come there before swooping down and capturing them with ease.

Squirrels avoid spending a lot of time in open areas as a result of this. When they do, they’ll spend a lot of time supporting themselves on their hind legs in an upright posture so they can keep an eye on the birds in the air. However, there are many more species that would surprise you and eat a squirrel.

The majority of people are unaware that squirrels may be eaten by bigmouth bass. Squirrels can go down to a river or stream to drink water even though they don’t swim. They’re excellent swimmers, but they avoid the water if possible.

They are aware that different species of fish will attempt to consume them. If they are able to drink while being caught, some large fish may capture them. Fish of various shapes and sizes will dine on squirrels when they drown.

They are vulnerable to crocodiles, alligators, and other predators that prowl for food by the water while drinking water along the coast. These animals require water to survive, and yet they must put their lives in peril despite the fact that they are well aware of the danger lurking beneath the surface and on the beach.

How To Protect Baby Squirrels From its Predators?

If an injured squirrel is left untreated, it risks death from infection. If the squirrel has fly eggs or maggots on it, it will need expert care from a licensed wildlife rehabilitation professional to survive. Alternatively, if the squirrel is chilly, it should be warmed before attempting to reunite it with its mother. It’s false that the newborn will be rejected because he was handled by people. If the kid is chilly and drowsy, she may reject him.

A zipper-top plastic bag that has been partially filled with very warm water may be used to keep the baby squirrel warm. The water should be quite hot (around 105°F), but not scorching hot. Place the squirrel inside a plastic bag and wrap it with a clean, ragged-free cloth. Place the squirrel on top of the cloth-covered bag to warm him up. Cover the newborn with a single layer of ravel-free fabric to conceal it from predators and keep it warm.

Place the squirrel in a shallow cardboard box on a warm water bag as previously explained to reunite a cold, ill squirrel with its mother. Place the box beneath the tree where the nest was found.

All of these steps should be done only during the day. The red and gray squirrels are very busy during the day, so the mother squirrel won’t see them at night, but a roaming predator might. DO NOT leave it out overnight!

Do not put anything in the box with food or a glass of water. The rodent could be preyed on and become wet, cold, or even drown in the dish of water if you do so. Keep an eye on the youngster from indoors to make sure your presence does not scare the mother squirrel away, preventing her from returning.