What Do Baby Lizards Eat?

It’s a great deal of fun to raise baby lizards. You may train them and form a strong attachment with them, and you are technically their parent. Owning any pet is a weighty responsibility, and the infant is completely reliant on you for care and attention.

Newborn lizards are the same as full-grown lizards. It’s incredible what a new lizard can accomplish at birth. Baby lizards are extremely self-reliant. They may survive without their mother for some time after they’re born.

Lizards are rather easy to care for. It’s worth noting that keeping certain lizard species as pets is strictly prohibited, especially if they’re endangered.

If you’re thinking about acquiring a baby lizard, this article is for you. Because at the end of this post, you will learn what babies lizards eat.

Baby lizards are self-sufficient from the moment they hatch. They do not require any assistance from their mother and eat the same meals as adults. A baby lizard’s diet is determined by whether it is an omnivore, herbivore, or carnivore.

However, as baby lizards have the same dietary needs as adult lizards, they will not be as efficient at hunting and foraging as adult lizards. As the lizard matures and develops, these abilities will be acquired.

Depending on the species, a pet baby lizard’s diet will differ. Consult with your veterinarian about the best food for your lizard to ensure its general health and wellbeing.

Baby lizards, like their adult counterparts, eat a wide range of foods. Baby lizards that are omnivorous eat anything from insects to vegetables and fruits. The diet of baby lizards depends if they are herbivorous, carnivorous, or omnivorous.

Worms are Also Considered Healthy For Baby Lizards To Eat

Baby lizards, like adult lizards, require clean, fresh, and chlorine-free water to drink. Baby lizards will also require food on a regular basis. To maintain baby lizards in good shape, make sure their cage is maintained in the best possible way.

Their diet is mostly determined by their size. Carnivorous and omnivorous lizards may need smaller animals such as worms and insects, or bigger animals such as frogs, mice, and other lizards if they are carnivorous or omnivorous. In addition to local vegetation, omnivores will include plant life from their surroundings.

Baby lizards will learn how to hunt while growing and developing, practicing on smaller prey like insects. When they mature and become more accomplished hunters, they will move on to larger animals. It’s very probable that wild baby lizards will continue eating insects entirely throughout their lives.

The diet of a wild baby herbivorous lizard is restricted to the plants, fruits, and vegetables available in its natural habitat. As with all lizards, what they eat is determined by where they live as well as their size.

When baby lizards are young, they are primarily carnivorous and later switch to a diet that is half animal flesh and half-plant matter. Adult lizards, on the other hand, tend to eat a more herbivorous diet than their predecessors, such as bearded dragons.

However, certain lizards, such as iguanas, are herbivores throughout their existence. A baby lizard’s diet is determined by whether they are insectivorous, carnivorous, herbivorous, or omnivorous.

What Do Baby Lizards Eat At Home?

What Do Baby Lizards Eat in The Wilderness? 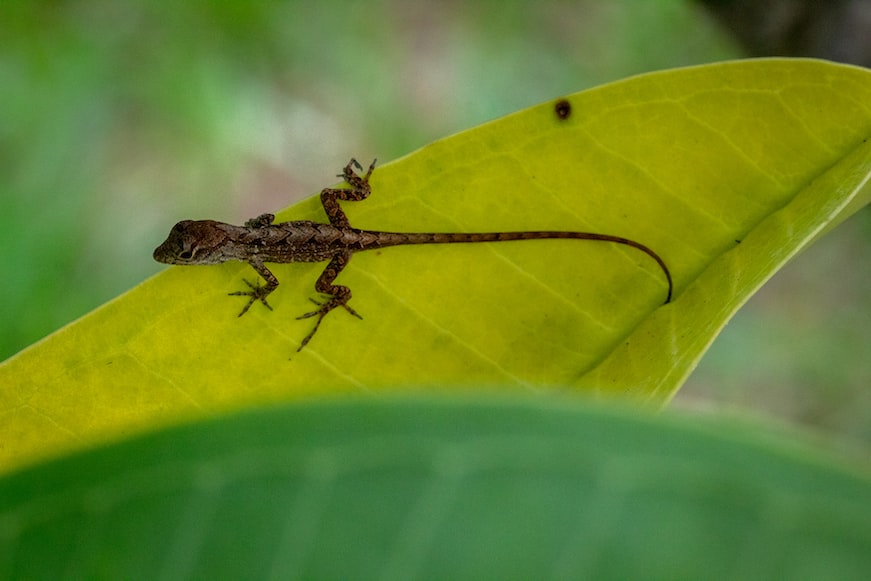 They have the digestive capabilities of an adult, whether the juvenile lizard is carnivorous, herbivorous, or omnivorous. A wild newborn lizard will be able to hunt and capture its prey as soon as its born. Baby lizards can obtain their required nutrition by eating a variety of plants or insects, depending on their choice.

How Much Do Baby Lizards Eat?

Small spiders, worms, insects, ants, and flies are among the babies’ tiny food. Baby lizards will also consume plants since even though tank plants may appear to be succulent, they can usually be nibbled on any portion. As a result, what a baby lizard eats is determined by its size.

A small lizard becomes larger as it matures, becoming a better hunter in the process. This implies that it has the ability to hunt, capture, and consume greater prey.

You should make sure that the food you’re feeding a lizard hatchling is no larger than its head. It may get trapped if the food is bigger than its head. You should also guarantee that any live creatures are removed from the tank if your lizard does not consume it within a few hours. A large living prey might reverse the situation and attack your lizard.

Baby lizards, know that they can be attacked and therefore usually bury their bodies at night. As a result, if you only see half of your lizard in the early hours, do not be concerned. If a lizard is unable to conceal itself in a corner, it will attempt to hide instead.

How To Feed Baby Lizards?

Your lizard can’t go hunting if you’ve bought a baby lizard or one has been born in your tank. If your tank is tiny and does not have any prey by default, then it’s your responsibility to discover baby lizard food and offer it to your lizard.

You should be absolutely sure what sort of lizard you have before looking for food for your baby lizard. This will assist you in determining whether it is carnivorous, herbivorous, or omnivorous. Once you’ve determined the species of lizard and the sort of food your lizard likes, go online or visit a physical pet store. You should discover food for your baby lizard at the shop.

A baby lizard is simply an adolescent lizard who has not yet reached adult size. You should not be scared to feed them live food. Adult lizards can consume and digest live prey, just like newborn lizards. However, as I have stated previously, ensure that the food is tiny enough for your infant lizard to consume.

You will be educating your baby lizard on how to hunt and sharpening their natural hunting skills by feeding them live prey. You should only offer your lizard hatchling live prey if you are confident it is herbivorous and will not consume insects or meat.

After you’ve obtained food for your lizard, put it in the tank and leave it alone. Do not go anywhere until after your lizard has eaten. If you leave, your lizard may choke or be harmed by the prey if he or she has not yet eaten it. So keep an eye on your lizard for around twenty-thirty minutes after he or she has finished eating. Remove all unused food and uneaten prey once your lizard has had enough to eat for 20-30 minutes.

This will keep your lizard cage clean and prevent uneaten food from harming your pet.

What Are The Natural Predators of Baby Lizards?

Lizards are frequently preyed on by birds. Because lizards enjoy being in the open to bask in the sunshine, they are especially vulnerable to predators due to their elevated position in the sky and excellent eyesight.

Lizards are hunted, killed, and eaten by larger birds of prey such as owls, hawks, and eagles. Snakes are also a significant predator; some snakes consume almost all of their diet in the form of lizards.

Baby Lizards are far more at risk than birds because snakes can be found on land and in the trees. Furthermore, snakes have the ability to swallow prey entire, which means they may consume lizards considerably larger than themselves.

Lizards also prey on a plethora of tiny lizards. Even though the same species of lizard may be a predator of the young, there is no maternal protection for those that are born, thus they are extremely easy prey. When we talk about newborn lizards, the mortality rate exceeds 50%.

Many species of animals, such as weasels, consume lizards. Although lizard species number in the hundreds, they are generally at the bottom of the food chain and many creatures rely on them for their nutrition.

Do Foxes and Snakes prey on Baby Lizards?

Foxes are omnivores, which means they eat everything, including lizards. Foxes, on the other hand, do not entirely rely on lizards for food. If lizard prey is accessible, coastal foxes will consume them. Similarly, while red foxes are known to eat lizards, they do so only rarely.

Meanwhile, captive snakes are fed on lizards by far the most. With the varying types of lizards that snakes consume, there are distinct differences in terms of skin and hence digestibility.

Are Baby Lizards Healthy To Eat? 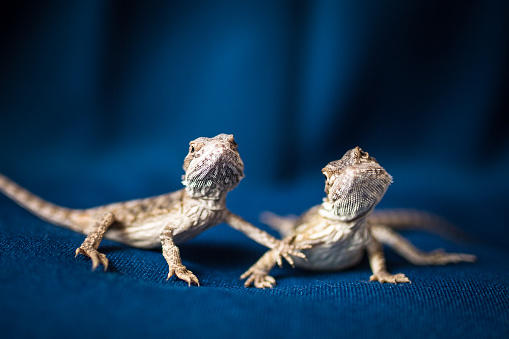 A Couple of Baby Lizards Chilling in Their Habitat

Adult and baby lizards are eaten in many countries, including the United States. Hunting and consuming wild lizards yourself than purchasing lizard meat from an exotic butcher might pose greater health threats. Wild lizards may be infected with disease-causing germs. They have razor-sharp teeth and claws, which can cause a serious infection if they come into direct contact with you.

In general, if properly cooked, lizards are safe to eat. There are few official guidelines on temperature for cooking reptile flesh, but it is thought that it should be heated until the internal temperature reaches 165°F.

If you’re buying lizard meat from a specialty butcher, learn how to handle, cook, and store it properly. Lizards and other reptiles can have detrimental effects on your health if not appropriately cooked.

If a lizard’s meat has not been properly cooked, it might contain bacteria that can cause a foodborne illness or food poisoning. Nausea, diarrhea, and vomiting are all common symptoms of food poisoning. Some of these germs may be found in more popular meats, such as chicken. Lizards and other reptiles are more prone to acquire them, along with a range of other pathogenic microorganisms.