What Do Baby Praying Mantis Eat? 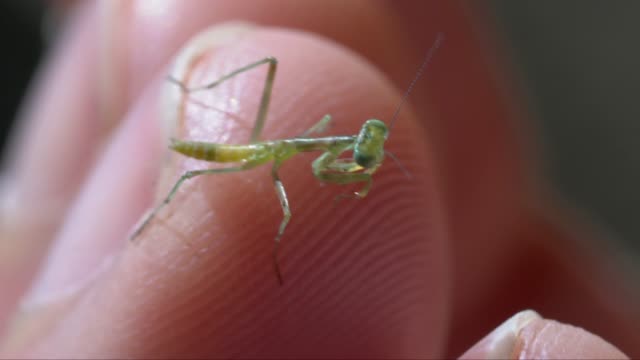 It’s possible to have a lot of fun with a praying mantis as a pet. You may observe them develop through different periods without spending an arm and a leg on their upkeep. Although they are easy to care for, praying mantises require special attention in order to survive and develop.

What is the proper way to care for a baby praying mantis? Healthy feeding, appropriate enclosure, and monitoring are all part of caring for a newborn praying mantis. Aside from that, the phases in a praying mantis’ life cycle are important factors to consider while maintaining them.

The diet of a baby praying mantis is similar to that of an adult. This implies that the majority of the time, it’s insects. What they eat, on the other hand, will be considerably less. You may also want to give them food that doesn’t move around as much.

You should also avoid feeding your praying mantis, baby or adult, whatever a wild praying mantis would eat, such as frogs, bees, wasps, ants, or even spiders. Praying mantises only develop the ability to use certain weapons and defenses after they reach maturity.

However, you can attempt to feed the following to your baby praying mantis:

A baby praying mantis will make a fun science project. However, make sure they’re relatively young fruit flies. They shouldn’t be larger than the praying mantis. Fruit flies that are a few days old are ideal for this purpose.

Another advantage of raising your own feeder insects. It assures that you have the appropriate sizes on hand to feed your praying mantis. You may also offer a mealworm diet to the baby praying mantis aphids. Fruit flies, on the other hand, are likely to be a lot simpler for you to raise. 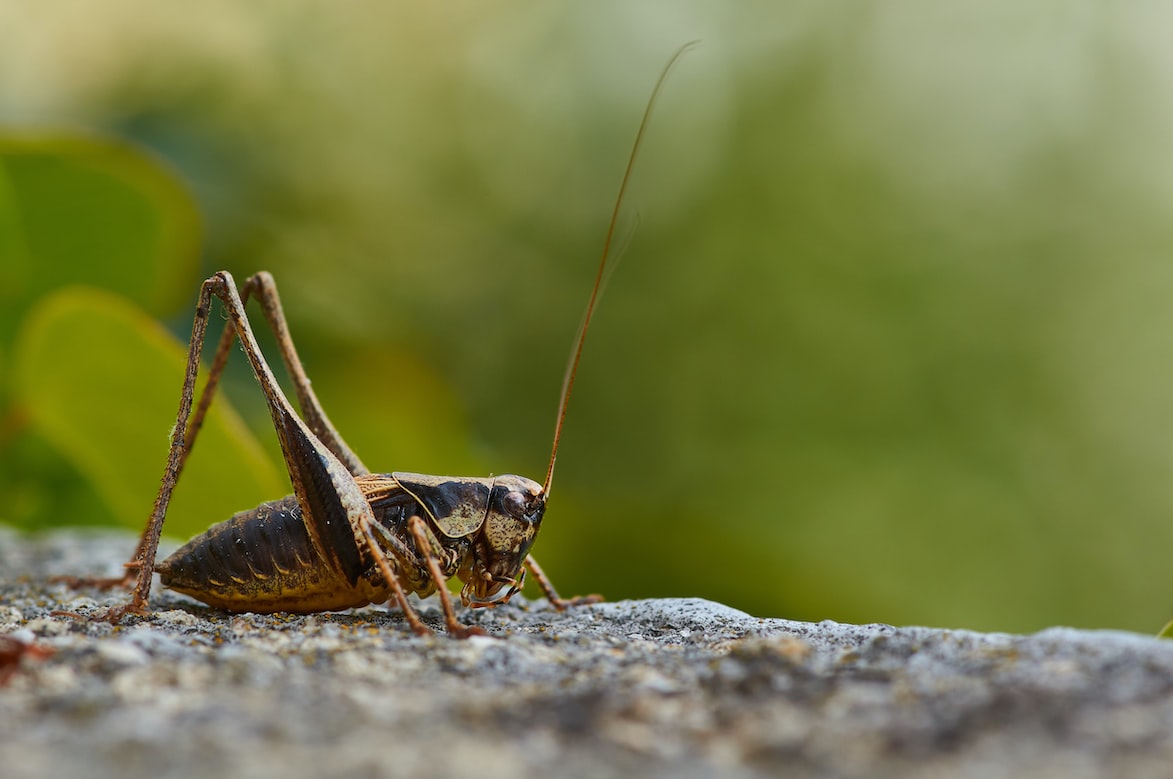 There are some folks who have fed their baby praying mantis with raw meat, but we wouldn’t recommend it.

However, do bear in mind that you will have problems. Unless you give it their illusion that the meat is alive and moving, the baby praying mantis may not consider eating the meat altogether.

Some people have used a piece of string to move the meat from side to side in an attempt to solve the problem. However, there is no assurance that the praying mantis will eat the meat.

What Do Baby Praying Mantis Eat in The Wild?

The praying mantis in the wild is a natural weapon against the summer’s swarms of annoying insects. They will consume almost everything, including each other, but their cricket, fly, moth, and mosquito pest control make them unrivaled natural allies in the landscape.

The life cycle of the mantis is complex, with cannibalistic mating as its first stage, followed by an egg rest period and then a nymph stage before reaching adulthood. You may find praying mantis egg sacs throughout North America, but in colder regions, you may need to resort to purchasing them for use in your garden.

Praying mantis egg sacs may help you discover the sacs in your landscape. When do mantis casings hatch? In the spring, as temperatures rise, these predatory insects begin to crawl out of their shells. That means you should be looking for cases from late fall through early spring.

Water is not required for a baby praying mantis. In fact, you don’t even need to give adult water to an adult. They should be able to get all the water they require from the food they consume.

It’s critical that you don’t place a water dish inside the praying mantis cage. If you do, your praying mantis is likely to drown, especially if they’re still learning how to get out of the water dish.

To sidestep this, some people place water-soaked sponges in the praying mantis cage. However, there is still little need to give the insect more water.

How To Feed Baby Praying Mantis? 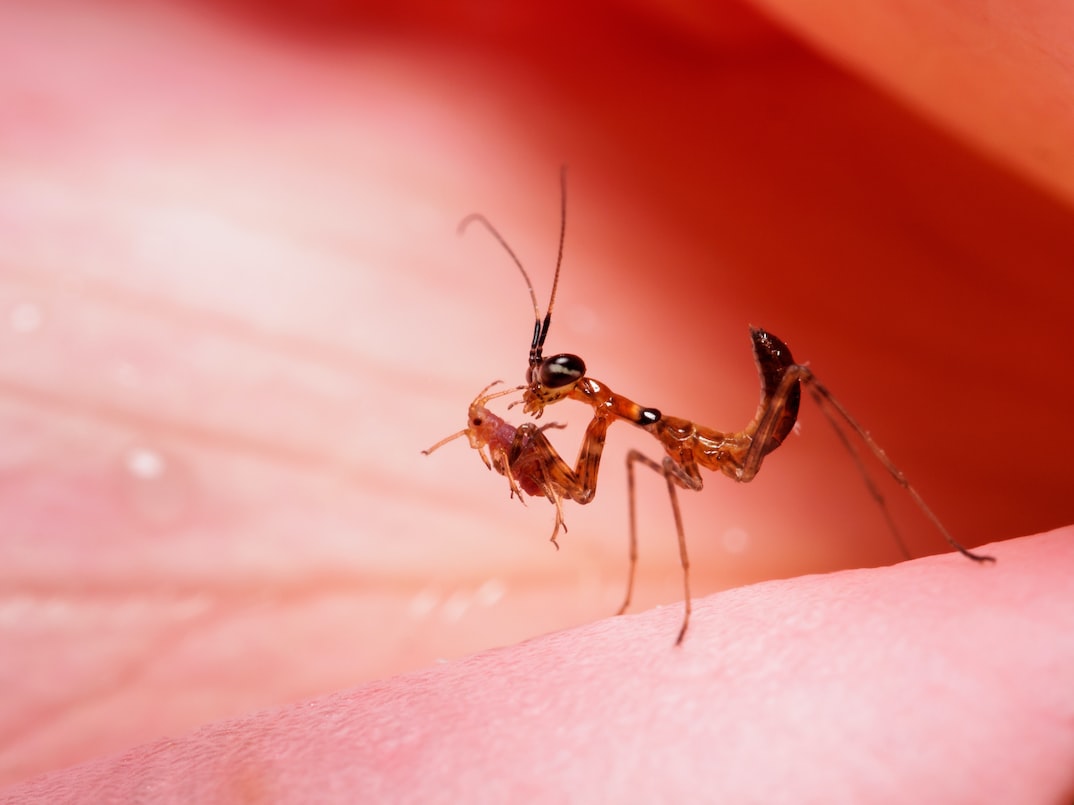 When it comes to caring for any sort of pet, feeding is a priority, and a baby praying mantis is no exception.

Baby praying mantises start feeding as soon as the eggs hatch and they emerge. Baby mantises feed primarily on tiny insects and flies, unlike adult mantises. As they get older, they widen their diet to include bigger prey.

Praying mantises have a distinct feeding schedule in that they do not consume every day. They may go without food for up to four days in a row. You should feed them at least once every three days, however, even if they don’t require it.

The fruit fly is one of the favorite meals of baby mantises. The newborn mantis may be fed with aphids, grasshoppers, midges, and other insects that are comparable in size. To feed a praying mantis, you must use an insect or fly that is still living.

When it comes to feeding the mantises, you should make sure they eat what you offer them. The prey may flee or conceal itself from time to time. If this happens frequently, the baby mantis may starve as a result of his or her diet not being adequate.

What Are The Natural Predators of Baby Praying Mantis?

Praying mantes, generally, are quite fast and deadly, with amazing green eyes that dominate a triangular head-turning 180 degrees to each side. It’s hard to imagine the praying mantis becoming food itself, but many predators appreciate having a mantis for supper because of its flight ability and strong fighting skills.

The praying mantis is cautious of a variety of insects. A baby mantis taken in a web will be devoured by spiders, as long as it is not larger. Praying mantises and tarantulas battle each other, with the victor’s dinner generally ending up being the bigger one.

The 2-inch thick body of the Japanese giant hornet is topped off with cutting jaws and long stingers, making it one of the world’s only insects to kill the praying mantis.

A praying mantis spends much of its daytime hours perched on plants, waiting for butterflies and other insects on the menu to land on a nearby blossom. The mantis’ light-sensitive eyesight is very acute. When the mantis sees a tiny motion, it becomes active, swooping down and plucking the insect from its perch. The mantis becomes more active at night, fluttering about lights in order to catch insects for a meal and making itself vulnerable to nocturnal bat pred

Mantises are also adept in defense in the air. On the ground, their opponents should think twice before attacking. Mantises may grow up to 6 inches long, and pregnant females have been observed consuming mice, scorpions, snakes, and lizards. Snakes, lizards, and scorpions will typically avoid small mantids because they are wary of the quick spiky front legs and savage battling tactics. Frogs are another natural enemy that can kill or be killed depending on their size.

Praying mantises are helpful predators that may collaborate with other insects, such as ladybugs and lacewings, to keep garden pests under control. Chemical pesticides can harm both bugs and the praying mantis. Garden chemicals may wipe out an entire mantis species, including egg cases, nymphs, and adults, with just one blanket application. While the pests you were attempting to destroy will be back in a few weeks, mantises may take years to recover.

How To Protect Baby Praying Mantis from Predators?

Praying mantids are beautiful, frightening-looking insects with thin legs and bulging eyes. Praying mantids are unquestionably formidable hunters, but they also have some of the most efficient anti-predator mechanisms imaginable. Camouflage is one such defense. That’s precisely what camouflage does: it largely protects praying mantis from predators. Let’s have a look at one of nature’s most powerful predators amazing power.

The majority of praying mantises have a green textured body and their skin is colored in a way that gives out an illusion, making it difficult to spot one even if it’s perched right in front of you. Mantis prefer to sit on top of green grass or leaves, which provides them with excellent camouflage. The praying mantis almost vanishes into the tall grass.

The mantis female is said to threaten predators by standing up on her abdomen and raising her front legs. They have claws on their front legs, as well as a shield-like plate behind the head. These stick insects, on the other hand, use camouflage to defend themselves.

Some mantis, on the other hand, is brightly colored. Some of the mantes have a mix of brown and green hues with varying degrees of gray. Ground-dwelling species will generally stay on the bare ground, but they make sure that their bodies do not cast shadows on the ground to notify predators of their presence. Instead, they most likely flatten their bodies and eliminate any possibility of shadows.

Flowers are the preferred pastime for flowers mantis. Some types, on the other hand, can change from white to black after molting. This is especially true for species that live in Africa or Australia, where the dry season is common. They may conceal themselves among bush fires thanks to their transformation to black-colored bodies.

What Is The Difference Between Praying Mantis and Grasshoppers?

Grasshoppers are herbivores, eating vegetation rather than animals. Praying mantises, on the other hand, are carnivorous predators that will consume other insects, arachnids, small mice, and even hummingbirds if they get the opportunity. There are also differences in species and body structure.

Praying mantis have a clever hunting technique: their head swivels completely around, so they don’t miss anything, and their legs have spikes that help them catch food. It’s common to see a few grasshoppers or praying mantises, but if you spot one, keep your eyes open for many more. A grasshopper will dig a hole and deposit up to 100 eggs.

What Do Locusts Eat?